Lately I had to do some visualizations of molecules after MD written in multirecord PDB files, each file containing MD frames for a different molecule. Loading it and preparing the conformations was no big deal - I just split every conformation into different object.
split_states D1_wszystko The command above will generate new objects called D1_wszystko_0001, D1_wszystko_0002, D1_wszystko_0003 and so on. Since the goal was to compare the different structures and because there was over six hundred of them I had to use some python magic to make my life easier. Lucky for me Pymol comes with a grouping command.
for i in range(1,624): cmd.group("D1_AMBER","D1_wszystko_%04d" % i,"add") This will make a group called D1_AMBER containing all the D1_wszystko_XXXX objects that could be easily collapsed when not needed. 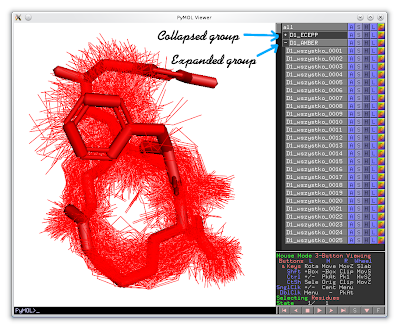